We love seeing our customers trailers in action, our trailers are excellent value, easy to use and built to last – well suited for Club, Private or Professional use.

We would like to thank the guys at The Classic Motor Hub for sharing some rare photos of the first ever Aston Martin DB7 Zagato that was ever made, from a run of just 99 built worldwide. The DB7 Zagato is loaded up on a Woodford Galaxy Trailer ready to be delivered to its new owner. 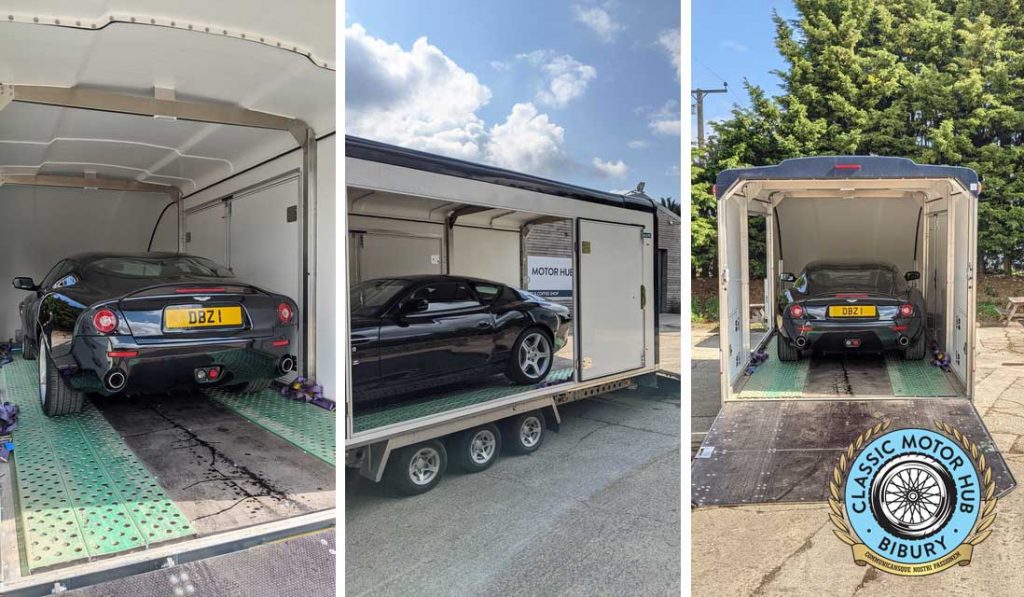 The Aston Martin DB7 Zagato continued a relationship that had started in 1961 with Zagato’s legendary development of the DB4GT. It was first unveiled in July 2002 to a select group of clients at a private event on London’s Savile Row, at the premises of bespoke tailor Gieves & Hawkes. The reaction was immediate: by the time it was shown to the world’s press later that month, the entire limited-edition run of 99 cars had been sold.

The DB7 Zagato project had its roots in a chance meeting at the 2001 Pebble Beach Concours d’Elegance. Dr Ulrich Bez and Andrea Zagato were both acting as judges, and over dinner Bez proposed the idea of a new collaboration between them. The initial sketches were completed less than a month later and the brief was for a more muscular and compact car than the standard DB7 – a design element that evoked the DB4GT Zagato.

Following a review by Aston Martin’s design team, the go-ahead was given in March 2002 for a prototype to be developed. Codenamed ‘Georgia’, it featured an all-new body that was hand-beaten by the craftsmen at Zagato. Aluminium alloy was used for the bonnet, doors and boot, while the front wings and the signature ‘double bubble’ roof were steel.

After the body had been constructed in Italy, each DB7 Zagato returned to Aston Martin’s Bloxham site in the UK for final assembly. Eight layers of paint and lacquer were applied, while the double-stitched aniline leather used inside was immersed in a dye bath in order to acquire its final colour – a process that retained the material’s soft touch.

This was far from being just a styling exercise, though. The car’s wheelbase had been reduced by 60mm compared to the standard DB7, while stiffer springs and dampers were fitted in order to improve its handling. Changes to the 6-litre V12’s fuel injection and ignition timing boosted power from 420bhp to 435bhp, and a lower axle ratio was used in order to improve acceleration.

Performance was staggering – a top speed of 184mph and a 0-60mph time of five seconds – and its status as a driver’s car was boosted by the fact that only a six-speed manual gearbox was available. There was no automatic option.

Much rarer than the subsequent Vanquish Zagato, the DB7 Zagato was a spectacular ‘last hurrah’ for the model that is credited with saving the marque, and its status as a collector’s car has only grown in the past two decades.

The Classic Motor Hub near Bibury is more than just a showroom. It operates on a five-acre site in Gloucestershire dedicated to classic car and motorbike sales, and events for motoring enthusiasts.

To find out more about our Woodford Galaxy Trailer click here 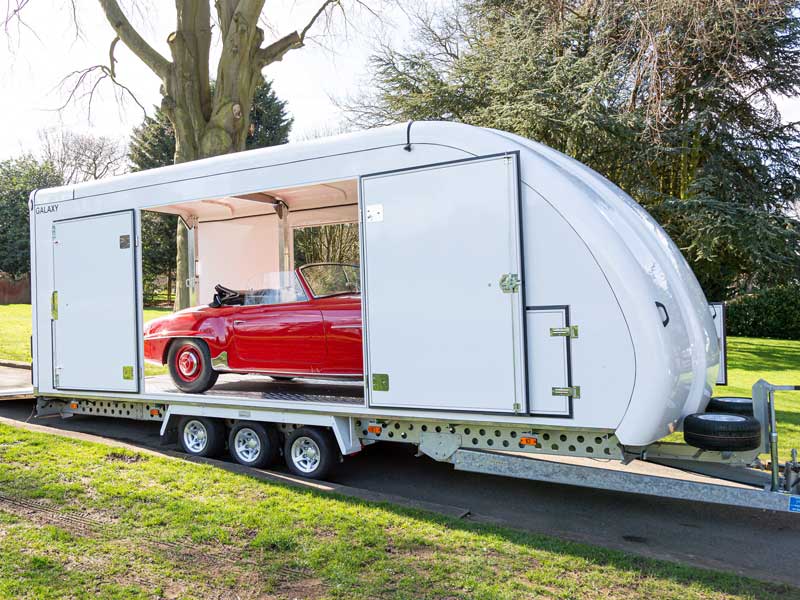 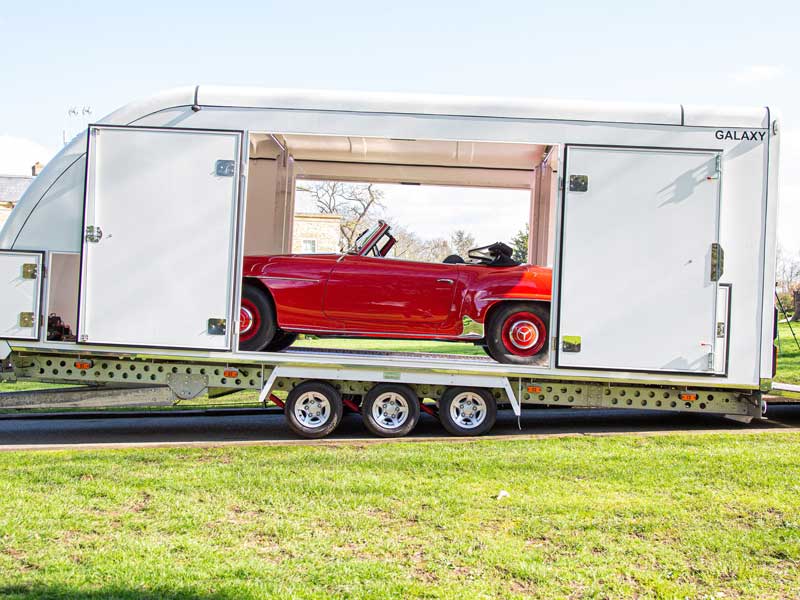 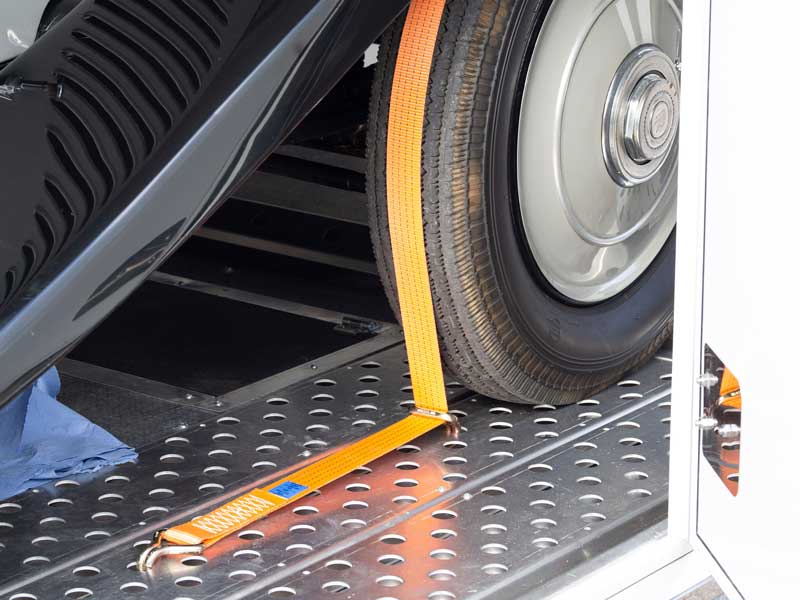 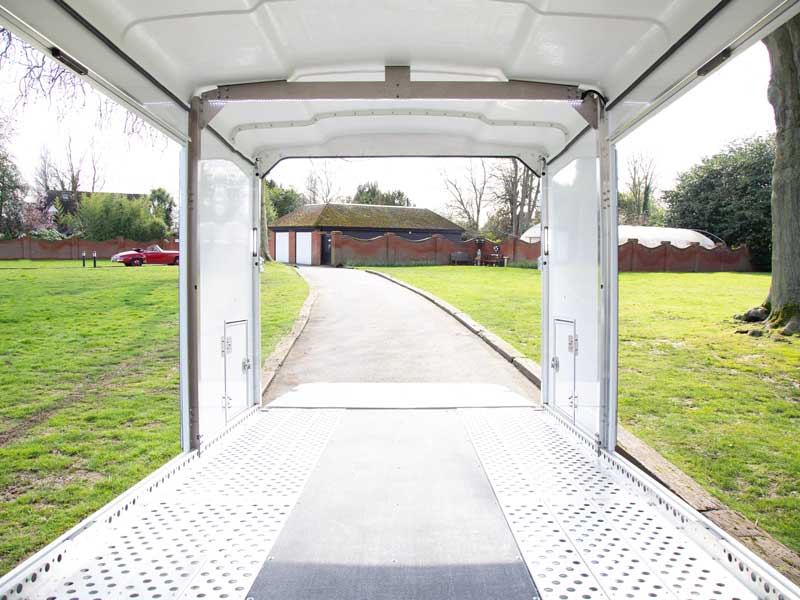 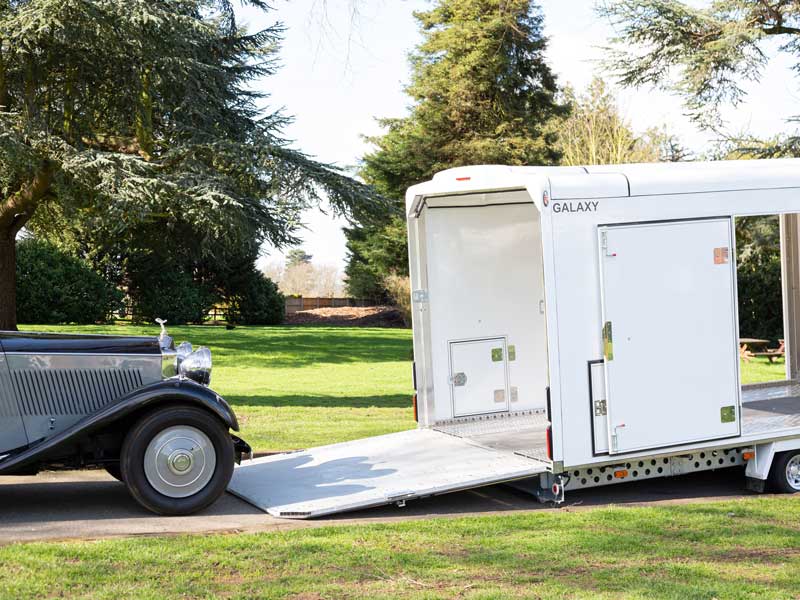 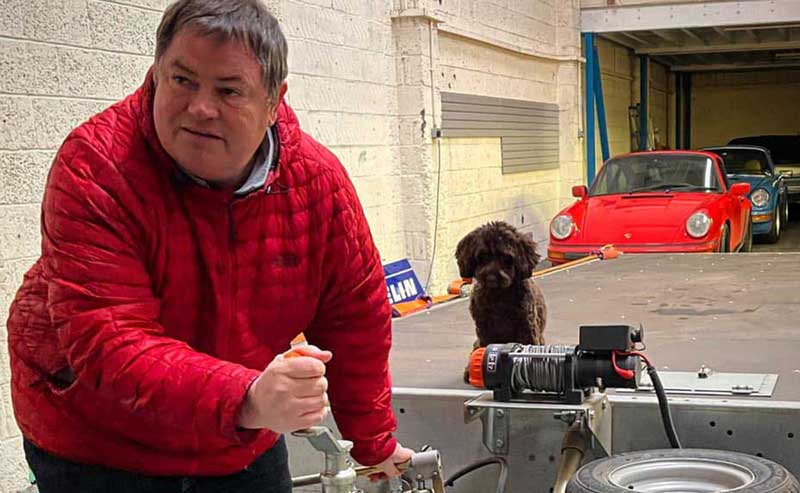 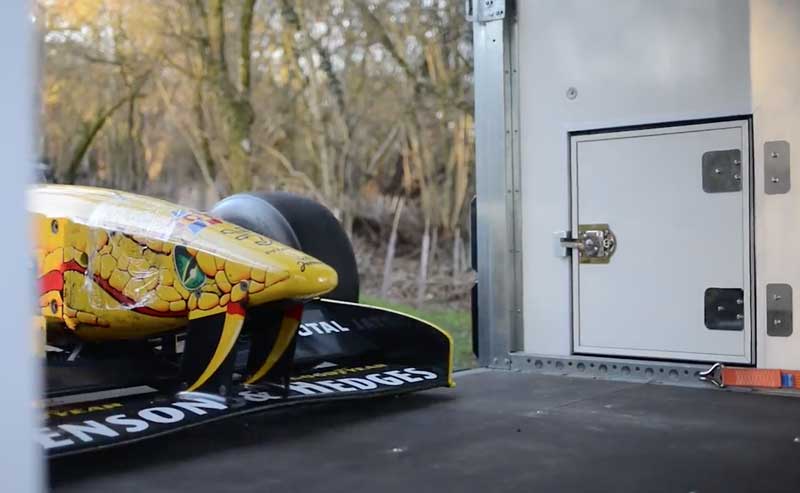 Read more
0
We use cookies on our website to give you the most relevant experience by remembering your preferences and repeat visits. By clicking “Accept All”, you consent to the use of ALL the cookies. However, you may visit "Cookie Settings" to provide a controlled consent.
Cookie SettingsAccept All
Manage consent

This website uses cookies to improve your experience while you navigate through the website. Out of these, the cookies that are categorized as necessary are stored on your browser as they are essential for the working of basic functionalities of the website. We also use third-party cookies that help us analyze and understand how you use this website. These cookies will be stored in your browser only with your consent. You also have the option to opt-out of these cookies. But opting out of some of these cookies may affect your browsing experience.
Necessary Always Enabled

Performance cookies are used to understand and analyze the key performance indexes of the website which helps in delivering a better user experience for the visitors.

Analytical cookies are used to understand how visitors interact with the website. These cookies help provide information on metrics the number of visitors, bounce rate, traffic source, etc.

Advertisement cookies are used to provide visitors with relevant ads and marketing campaigns. These cookies track visitors across websites and collect information to provide customized ads.

Other uncategorized cookies are those that are being analyzed and have not been classified into a category as yet.